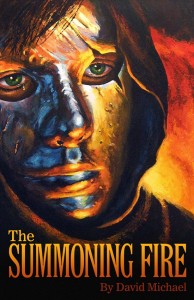 Chapter 2
Before the Fire
Reese-Anne

Reese sheathed the katana. There was no need to wipe the blade–and doing so would likely prove painful at best, maiming at worst. The old witch-woman’s blood had long since been absorbed by the black blade. Maybe its edge, normally invisible, a blur along the line between life and death, still glinted red, still thirsty. Or maybe that was Reese’s imagination.

It wasn’t hard to believe, though, that both she and the katana were thirsty, wanting blood, demanding vengeance.

She stood there, long hair hanging loose in front of her face, left hand holding the sheathed blade, right hand empty but close to the pistol grip of the shotgun that hung by a black strap from her shoulder, looking down into the lifeless eyes of the old witch-woman for another long minute.

The pool of blood under the woman was smaller than it should have been considering the length of the wound that Reese had opened up in her mid-section. Reese wondered if the blade accounted for that. Or if there were another reason.

You are the key, Reese-anne, the witch had said, blood running down her chin as she spoke. No blood was on the woman’s face now, and the wrinkled skin seemed to have been smoothed, made younger as if death had taken off some of the weight of her years.

Reese didn’t want to be a key. She wanted Sam back.

The black eyes of the dead woman didn’t respond.

The woman had startled Reese, stepping in front of her from out of the crowd. Then angered her by using a name unheard since her long ago childhood. Reese-anne. The name conjured up suppressed memories of … pain. Pain made more acute because with the name Reese remembered her life before Hell on Earth. Mother smiling, hugging her. Father, proud of her, holding her hand. When she had been happy. Before she died inside.

And so she had struck, running the woman through–

No. That wasn’t it. Reese decided she owed the dead woman at least that much honesty, even if only in her own mind.

Reese had killed the woman, without thinking, a reflex, unconcerned and unconnected with any consequences, an attack born of a need to kill something, anything, and maybe everything. Because Sam was dead. Sam had been killed by the Old Man. And when Sam died the rest of Reese had seemed to die too–not that there had been much left.

Reese-anne had been dead for over a decade before Reese met Sam. And Reese had been on the way out, and intent on taking as much and as many with her as she could. That is, when she could be reminded that there was anything or anyone other than herself and her own pain.

She wondered what Sam had possibly seen in her that night, the two of them sitting in the police holding cell, joined only by a bond of bars and shared assault.

That was the Reese who had stood up from the gutter, reminded of who she had been before Sam–who she was again–by a dirty urchin who tried to steel the weapons the Old Man had left with her. She only wondered why she hadn’t killed the boy. The old Reese would’ve. But she had let him go.

The old Reese had been there, though, when the witch-woman stepped up. And the old Reese struck. Deep and hard and fatal.

“You died,” Reese said aloud to the corpse on the sidewalk, “because I should have.” Her voice became a shout. At the dead woman. At the Old Man. “You should’ve killed me.” Neither one responded.

Accept my sacrifice, the woman had said, as she died. The words came back to Reese as if in response. As if the old witch had known what Reese would say. Hope is born of little sacrifices, the witch had continued. Accept me … mine. You are the key, Reese-anne.

Reese shook her head, trying to shake out the woman’s words. People didn’t die for anyone. Only because of them.

Around her the pedestrians of the night had resumed their traffic on the sidewalk. They gave Reese and the corpse at her feet a wide berth, but now that Reese had put her sword away the space around her was closing. Some people stared at her, or at the corpse, but no one stopped. She and the body of the witch-woman were just momentary curiosities in the night of Hell on Earth, and would soon be forgotten.

Reese wished she could forget.

She walked away from the witch-woman. Behind her, she could sense the bottomfeeders move in to search the body, to fight over the valuables, if any, and the clothes, and the shoes, and, finally, the body itself.

She should have died. But here she was, walking around, armed. And dangerous.

You have to face him.

Reese nodded to the memory of the witch-woman’s voice. She knew who the woman meant, who she had to face.

Moving against the Old Man was suicide. She understood suicide. Welcomed it, even. So she kept walking, taking one step after the other.

The woman had seemed … worried … as if there had been some chance that Reese might not have been willing to die attacking the Old Man.

She knew the Old Man meant to use Sam’s blood for–something–in the morning. The bastard told her that himself, and laughed when she lunged at him, held back by four of his flunky devils, the claws of their hands digging into her flesh. Before he had her thrown out into the street with both her shotgun and Sam’s katana, mocking her.

She had to admit, to herself and to the dead witch-woman, that there had been a moment, maybe long minutes stretching into hours, when she had lain there in the gutter, not seeing the people walking around her, avoiding looking at her, feeling the bottomfeeders circling her, human vultures making sure she wouldn’t fight back before they moved in, when she had considered just laying there until she died.

And then she had thought of escape. But only for an instant. There could be no escape in Hell on Earth, and Suburbia–

Reese didn’t know if she could live in the place where tourists came from. Nor did she think they would let her live there.

Still, the pictures she had seen, and some of the tourists she had met, reminded her of what life had been like before Hell Erupted and begun the painful beating, raping, killing conversion of the innocent child Reese-anne into the killer woman Reese.

Reese carried the shotgun in her right hand as she walked, holding the pistol grip. In her left she carried Sam’s katana, holding it by the scabbard, just below the hilt.

If the witch-woman had really wanted to help her, Reese thought, she would have told Reese where the Old Man was going to be in the morning, where she could find the bastard. The least the witch could’ve done was to point the way to the end. Because there could be no hope for Reese. And keys only opened doors. Or locked them.

The old woman had wasted her life and her last breaths. Reese didn’t know where the Old Man was going to be, but she knew where to go to find out.

The line of men and women and devils and undead and whatever the Hell else standing outside the Smoking Pit, the Old Man’s posh nightclub, didn’t move aside for her. Many of them were already dead, and most of them had been waiting for at least an hour to get in. Weapons and deathwishes didn’t impress them. They stood their ground and glared back at Reese.

“Back of the line, bitch,” said a woman, either a vampire or a fashion-impaired wannabe, dressed in glittering green.

Reese lifted the shotgun and put it in the vampire’s face. “I don’t have time to kill you properly,” she said. “But I can make you damn ugly. And,” she added, “the blast would ruin your dress.” She looked at the man next to the woman, but kept the barrel of the gun rock steady at the woman’s pert nose. “And your suit.”

The people in line gave her more dark looks but grudgingly moved aside. Reese held the gun at waist level as she walked through the crowd. She ignored the comments and curses thrown at her. Being called bitch, whore, cunt, and worse didn’t bother her. She knew what she was. Everyone else was just guessing.

The bouncer at the door recognized her. “Reese,” he said, his face going pale under the red neon lights, either from seeing her or from the gun she thrust in his face. Maybe both. “The Old Man’s not–”

“I know where he’s not,” Reese said, tapping him under the chin with the end of the sawed off barrel, forcing him back against the big door he had been guarding with its billboard announcing the Cannibal Sluts in concert–“Tonight Only!” “I want to know where he is. Or where he will be, tomorrow.”

“Then you’re not much fucking use to me, are you?” She pushed his chin up with the barrel, angling the barrel so the shot would go through his brain, what there was of it.

“Wait!” Sweat showed on his bald head. “I mean, hang on, I’ll get Rockhasp.” His left hand was trying to find the doorknob. He would have a hard time opening the door, though, since it was his own weight, pinned there by Reese’s shotgun, that he would have to pull against.

“I can talk to Rock without you,” she said, and bared her teeth at him in a smile. She shifted her grip on the shotgun and tightened her finger on the trigger.

“The Skymoon Room,” the bouncer shouted, talking as fast as he could with the barrel under his chin. “The Old Man–I heard him tell Rock–he went to the Cain’s Mark–”

Reese nodded, then pushed the shotgun up harder, forcing him to stop talking, to rise up on his toes. His breath came in hard gasps as his bulk hung on the end of her gun.

She should kill him. Her finger was on the trigger, waiting to squeeze that last little bit that would spray the contents of his thick head all over the door and up the outside wall of the Smoking Pit.

She wanted to kill him. Because Sam was dead. Because she had killed the old woman. This scumbag didn’t deserve better than either of them.

In her head she saw the old woman, heard the woman say, Reese-anne.

Reese rammed the hilt of the katana into the bouncer’s sternum, then stepped aside as he doubled over choking and gagging. She turned and walked away, ignoring the stares of the club’s patrons.

The Old Man had killed Sam in front of her, then left her alive with both her shotgun and Sam’s katana. He had to know Reese was coming for him. He had to know she would find out where he was.

He would be expecting her.

Going up against the Old Man was suicide. Or close enough as suited Reese just fine.